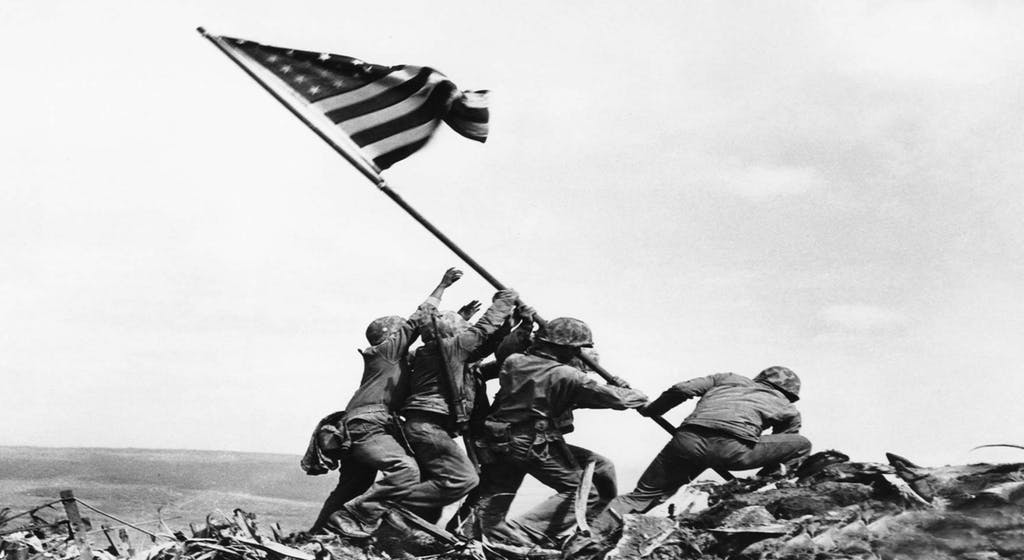 Some of you may have heard an interview I did on Friday 18th October on Ryan Tubridy’s radio programme on RTE 1 radio.

This came about after he got wind I had been involved in solving a misidentification in a famous photograph taken during World War Two.

This is the second time in three years that I have played a part in correcting misidentifications in the same photograph. This is the background to it.

Ever since I was in school I have been fascinated with the Battle of Iwo Jima which took place between February and March of 1945. On February 19th 1945, US Marines invaded the Japanese island of Iwo Jima, some 600 miles south of Tokyo. On February 23th 1945, a patrol of about 40 Marines managed to climb to the top of the highest point on the island, an extinct volcano named Mount Suribachi. In order to let everyone know they had seized the summit they decided to raise a small American flag but it was considered too small, so a larger replacement flag was raised about two hours later.

As this flag was being raised, an Associated Press photographer named Joe Rosenthal took his famous photo which is probably the most recognisable war photo ever taken. It caused such a sensation when it was published in papers back in the US that President Roosevelt ordered those men involved to be returned to go on a publicity tour to raise funds for the war effort.

Unfortunately, due to the fact that the battle was still raging and key participants and eye witnesses had been killed or injured, it was difficult to find or name those involved. Eventually one Marine allegedly admitted his involvement and gave other names of those involved. He was returned to the US and along with two others, they embarked on the 7th War Loan Drive.

In 2013 I was reading a book about the battle when I came across a photo I had not seen before. It was taken by Rosenthal seconds after the flag was raised, only this photo showed a face of one of the Marines. I knew that this was not who it was stated should be in that position. I spent many months compiling research and when I offered it to the Marine Corps they just did not get back in touch.

I then contacted a guy in America who had a website dedicated to the 5th Marine Division. Together we got our story in a paper in America in November 2014. It caused quite a stir. Still the Marine Corps wouldn’t buy it. In 2015, unbeknown to me, my ‘friend’ in America had signed a deal with a TV documentary company. Using my research they showed it to the Marines prior to their documentary airing in July 2016. The Marine Corps carried out their own investigation and changed the official line up. I was proven correct.

In 2016 while trying to get people interested in a book of photographs about the flag raisings, I asked an American colleague (who I have never met) to go searching for other photos. Another colleague (who I also haven’t met) said we should look again at the photo. He was convinced there was still a misidentification. Off we searched again for more photos. We did indeed discover more photos that allowed us to be certain that our suspicions were correct. We did this by carefully studying things like uniforms, helmet cover patterns and of course facial characteristics. We identified this Marine and tracked down his daughter. When she was visited and told the news she couldn’t believe it but said her family and the whole town had suspicions her Dad had been involved but he always kept quiet.

In 2018 I compiled this research into a PowerPoint presentation and forwarded it to the Marine Corps History Division. They kept in contact with us but we didn’t realise that they had gone to the FBI in order to check out all the photos for authenticity. The FBI acknowledged we were correct. The Marine Corps sent it to US Army historians who also verified it. Finally, earlier this month, in conjunction with a new book the Marine Corps are launching, they allowed this man’s daughter speak on American TV to announce that her Dad had been officially recognised as being a flag raiser in this famous photo.

Corporal Harold Keller was officially recognised as a flag raiser in 2019. Gagnon was removed from the line up but his contribution was recognised.

Welcome to TJ O'Mahony, Timber & Panel Products. Your one-stop-shop for all your Trade & DIY Timber requirements 13/07/2020